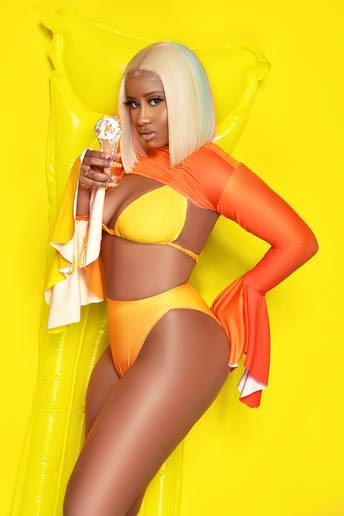 Ty Bri emerges as the next young female rapper to join the new class with the release of her debut mixtape, “Sweet Lick.”

Click HERE to watch the video which premiered earlier today on NYLON.

Ty Bri also announces that she has signed with

District 18 Entertainment is the imprint under RCA Records founded by Brooklyn Johnny who is best known for developing the careers of Cardi B and Kodak Black and in this newly formed partnership he will work on building Ty Bri as the next rising star.

]Best known for her tracks “Gimme Sum Money,” “Bobbin” and “Candy Lady,” Ty Bri is quickly becoming a standout in the rising female rap scene. She has opened for acts like Wale, Megan Thee Stallion and Lil Baby on tour. She performed alongside Mulatto and Flo Milli for the “Girls Trap Too” tour earlier this year and has also been co-signed by Cardi B and Rico Nasty. She plans to release an upcoming project this

year which will feature “Bobbin” and “Gimme Sum Money.”

“It’s crazy, I started a year ago and now I’m getting DMs and encouragement from some of my favorite female artists.” -Ty Bri

Listen to Sweet Lick, watch “Wake Up” ft. Mulatto and keep an eye out for more from Ty Bri coming soon.

grew her popularity quickly making it hard to believe she just started rapping in 2016. While she compares herself to no other artists, Ty’s musical influences include Beyonce, Nicki Minaj and Meek Mill. She plans to change the stereotypes of female artists

because her bars are for real. Ty Bri also enjoys giving back to her community and motivating young girls. She has even included the Shaw High School girls’ band and dancers in performances. Ty started to take over the Midwest when she remixed Ella Mai’s “Boo’d

Up,” which was later added into rotation on radio all over Ohio. She is also featured on Ray Jr.’s song “Big Tuck” and “Cook” by DJ Ryan Wolf feat. RootaBang. Since performing at Z1079’s Summer Jam and White Out in 2018 and 2019, Ty Bri received early co

signs from other female artists such as Trina, KashDoll and DreamDoll. Ty Bri is set to release an upcoming project this year which will feature her singles “Bobbin” and “Gimme Sum Money.”