During an exclusive interview with music producer Dun Deal, he reveals that he started in the music industry as a artist and eventually transitioned to a producer in 2006. Dun describes the life of a producer as a constant cycle of working daily, pushing the artists you believe in and being patient waiting for your time to shine.

For those who are not familiar with Dun Deal, he is the credited producer of hits such as Young Thugs “Stoner”, Migos “Hannah Montana”, Logics “Burried Alive”, Futures “No Love” & “Double Cups & Molly”, Gucci Manes “Point In My Life”, Ca$hOut “She Twerkin” and many more. Dun Deal began working with these artists prior to them being household names and advices upcoming producers to stick with anyone who they believe in.

“My mind works in the music- almost as if I was trained to play”.

Dun Deal describes his production style as soulful but not churchy and is able to pin point a hit if he keeps playing it over and over.

2017 is a rebirth for the producer as the past year he was dealing with legal issues involving him being falsely accused for a crime he did not commit. This year Dun Deal is looking forward to his upcoming joint mixtape with fellow producer C4. 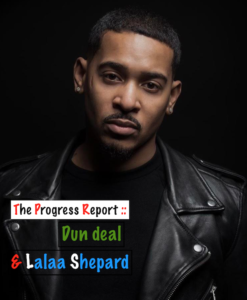