Trending
You are at:Home»Interviews»Quail Gotti sits down with Welsh Da God Of OnthesceneNY
Tweet 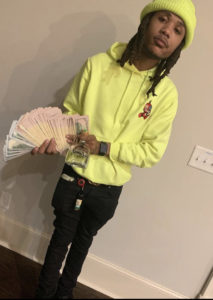 Welsh Da God from Onthesceneny.com sat down with new Atlanta street rapper Quail Gotti, less than a week after being shot 3 times. He discusses his influences and his motivation to put on for his brother who is currently serving life in prison. He also briefly discusses the tragic events that finally mad him pick up the pen. Quail Gotti have a story to tell and it isn’t a movie.

I’m Blessed, Healing up from getting hit 3 times from some amateur ass robber/shooters.

Welsh – “Quail-Gotti” where did you get that name from? What’s the backstory ?

My crew as a jit was the MOB And Quail is my name.

Welsh – What part of Atlanta are you from ?

Im from Campbellton Rd. I was born in Kimberly court and raised in Landrum Arms. As I got older we moved and terrorized Clayton Co literally.

Welsh – Who are some of your favorite rappers from Atlanta and who you like to collaborate with ?

My favorite rapper is my brother Half-Pint. I don’t listen to nothing but underground like Lil Dab , Slimesito and Big 36oz them my personals patnas and who I want and will eventually collaborate with. As for as main stream I’ll work with GUCCI fasho.

Welsh -Your manager Jon “Beauty Salon” Hamm said that he spent over 10 years going in and out the hood trying to get you and your brother Half- Pint to rap. What finally made you pick up the mic after never taken interest in it ?

LMAO, yeah he did. Mainly Pint (Half-Pint) though when it came to rapping, it was more so to me like you the older brother to get Pint to understand rapping a way out. I wasn’t tryna hear that shit though. Pint 1 and a half years younger than me but Shawty like my twin brother when I move he move just like that.

Welsh -What do you miss the most about your brother Half Pint, who is now serving life for murder ?

Me and Shawty been glued to each other since he came out my mama koonanny! We did everything together he wasn’t my lil brother but, more like my twin. I miss him making music and the hold we had together on the streets.

Welsh – Do you have a new perspective on life, being that you potentially escaped death with the failed attempted robbery in -which you was shot 3 times and killed one of the assailants from self defense” ?

I been dealing with Shìt like this all my life I just never been shot. My heart is colder now and trust even more fucked up. I’ve always thought, oh what if this or that happen so now I’m even more on edge but, I’m blessed to be here.

Welsh -Now you got the past behind you what’s next for you? What’s on the table ?

Expect a full project by mid June and you can look me up on any platform to find singles I’ve dropped at Quail Gotti.

Welsh -Give the people your social media and where they can get at you?

Welsh – As we are wrapping up this interview is there anybody you would like to shoutout here on this platform ?

Shout out to my family all the ones checked on me when I was shot, all the instagram posts. Shout out to Niqua the love of my life for nursing me back to health. Jalissa for the meals. D.Brown for the loyalty and REAL power behind the bankroll. All of my ghetto angels watching over. Shout out my Yhapsters. My dawg Jonbeautysalonhamm and P4PEnt for the faith and belief in me and shout to the Big GOD for keeping me here. Free Half Pint!!!

On The Scene Ny